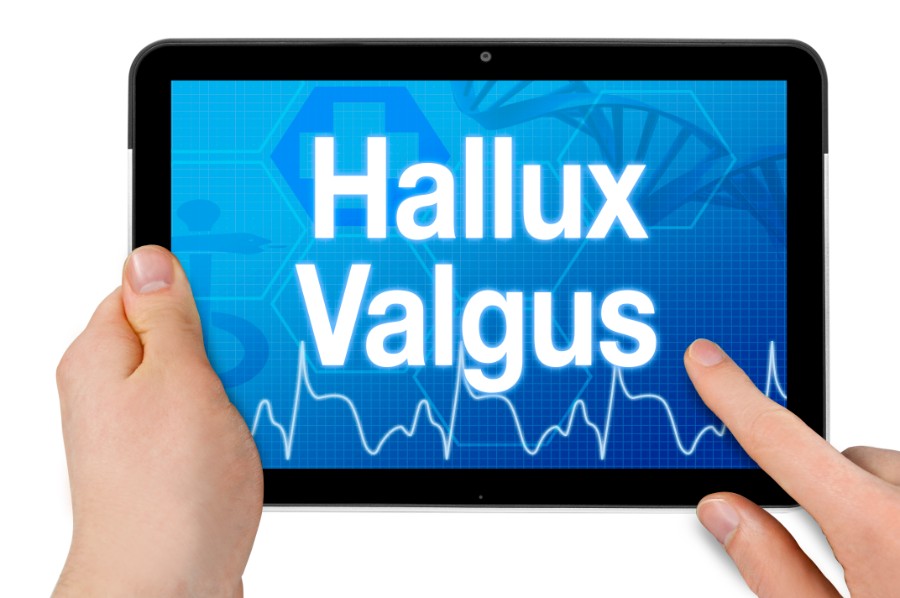 A bunion, which is scientifically referred to as hallux valgus, presents itself as a bump on the side of the big toe. However, the disorder is progressive, which means they tend to get worse over time and develop slowly. It often begins when the big toe starts leaving inward. This slowly moves the current angle of the bones and creates the indicative bump associated with a bunion. The “bump” will become more prominent, the more advanced the condition. Often, symptoms, if noticed at all, will only appear during the later stages.

Although many people assume that bunions are simply a result of wearing shoes that crowd the toes, this isn’t usually the source of the problem.
Admittedly, though, wearing improperly fitting shoes can exasperate the condition. In actuality, bunions are most often a result of genetics. This means people who suffer from bunions often do so simply because their foot is not structured normally. Degenerative diseases like rheumatoid arthritis can also make a person more likely to develop a bunion as well.

How a Bunion is Diagnosed

The foot specialists at Red Mountain Footcare are often able to diagnose a bunion simply by examining a patient’s foot. However, in some cases, an X-Ray can be helpful as it will enable the podiatrist to see if there is any joint damage, and if so, how much. It also greatly aids in choosing the type of treatment to best address the problem. The following are the most common treatment options associated with bunions:

Before a podiatrist recommends surgery, they often attempt to reduce the pain and treat bunions via nonsurgical treatment.  A few of the most common are listed below:

In some cases, surgery is the only remedy for a painful bunion. For example, if the presence of a bunion begins to interfere with a person’s daily activities, surgery can be necessary. There are various procedures that can be utilized to treat bunions. They include correcting the bony structure of the foot, as well as correcting the soft tissue damage that has occurred. The point of surgery is to reduce the deformity causing the bunion and reduce or eliminate the pain. Factors such as a patient’s age, activity level, X-Ray results and the severity of the deformity are all considered when choosing surgery as the treatment plan. In general, patient’s who are still growing, such as teens, are encouraged to make do with nonsurgical treatments until their feet stop growing.

Although the bunion itself is difficult enough to deal with, it can lead to other complications and conditions. A few of these are listed below:

Why It’s Necessary to Address a Bunion

Some people might assume such an innocuous condition could be ignored altogether, especially if the bunion isn’t especially painful. However, the metatarspophalangeal (MTP) joint, which makes up part of the big toe’s anatomy, is crucial to the proper balance and distribution of weight. Therefore, since a bunion can damage this all-important joint function and the surrounding ligaments, tendons and bones, it’s podiatrists’ advise patients to have a bunion examined by a professional, even if it hasn’t caused any significant problems to date. In addition, since a bunion can lead to the above complications, it’s a good idea to get it checked out, even if it isn’t causing pain.

As outlined above, a bunion, even though common, is not a condition that should be ignored. Anyone experiencing this condition should seek out a podiatrist like those at Red Mountain Footcare.